Rabbi Benjamin on the Palestinian Refugees

To the reader: At a time when the United States is pondering a strike against Syria, ostensibly to warn President Assad against further use of chemical weapons, it may seem odd to translate a piece that was written in October 1950 about the Palestinian refugees.  But it is not odd, for two reasons: first, the problem of the refugees will be with us well after the current crises in Syria and  Egypt have been resolved.  Second, and more importantly, “Rabbi Benjamin,” one of the pen names of the orthodox Jewish, Zionist, publicist , editor, and literary critic, Yehoshua Radler-Feldman (1880-1957), not only discusses the specific issue of the Palestinian refugees, but tells us how to go about addressing any issue of this sort.  Of course, he will be dismissed as a moral naif and visionary. Yet how many orthodox Jews do you know who would say that the three formative events in their moral development were the Dreyfus trial, the rise of Nazism, and the massacre at Deir Yassin? 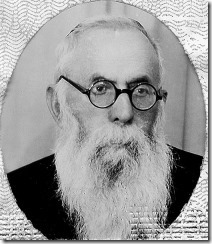 1. All men are brothers.

2. You shall love your neighbor as yourself.

3. Jews and Arabs belong to one family, the Semitic family.

4. The sacred right of a man and a people to its homeland is not abrogated by departure, expulsion, or flight, whether voluntarily or through compulsion.

1. The war between the Jews and the Arabs was the result of corrupt and distorted views that prevailed among the two peoples, and the corrupt political policies of their teachers and leaders.

2. The Arabs lost the battle because in their essence they are advocates of peace; they had no true desire for war, nor did they prepare for it.

3. They fled by the hundreds of thousands during wartime from their homes because they feared “Deir Yassinism,” and because they believed their exodus to be temporary.

4. The Arab refugees have the right to return to the land so as to be rehabillitated in the land as citizens with equal rights.

5. The cost of the rehabilitation has to be born by the State of Israel.

6. Their rehabilitation, like that of Jewish refugees, must come about through a general plan motivated by pure human good will.

7. Those Arab refugees who do not wish to return have the right to demand appropriate compensation.

1. The Arab-Jewish war was a war between brothers, an erroneous war, brought about by the fascist spirit that had become dominant in the world, and among Israel and the Arabs.

2. Israel’s [current] policy towards the Arab refugees is the direct continuation of the corrupt line of thinking that led to the war with all its negative consequences.

3. The continuation of this policy in the future means the militarization of Israel and the associated negative phenomena: moral corruption, fascist chauvinism, the fear of new wars and the renewal [of old ones], blood and tears, fraternal sacrifices, an economy of poverty, nakedness, and deprivation for generations.

4. The abandonment of this policy and a return to the policy of love and equality, justice and equity, will bring undoubtedly true peace between Jews and Arabs, will remove the negative consequences, and will contribute importantly to world peace

5. The return of the Arab refugees based on love and equality will revive the economy of the state, and will serve as the foundation of economic, cultural, and moral flourishing together: the messianic days.

6. Until that return has been arranged, any honest man who uses the “abandoned property” (houses, fields, movables, etc.) should know that this is essentially stolen property. If he has no choice, and he is forced to use it, he should set aside the appropriate “user fees” in order to remove them at the first opportunity to the rightful owners, as befits an honest man who is careful not to profit from highway robbery.

1. The foundation of foundations and the root of roots -- the foundation of faith and the root of hope – are two first principles that are in essence one – [that of] Unity and Love. All the darkness, all the tragedies, all the failures that have come into world from ancient times until the present, throughout the entire world and its regions – can be traced to the abandonment of this principle. The return to it is the cornerstone of mending the world (tikun ha-olam). This is nothing new, nor does it require any explanation or commentary. Every honest man understands this as self-evident (the dishonest man will draw no benefit from explanation; he prefers to remain lawless.) If, in any event, darkness prevails throughout the world, it is not due to a lack of understanding the principle, but rather to a lack of commitment and dedication to it. Everybody admits the principle, but they neither immerse themselves in it, nor cleave unto it.. They don’t understand that from the moment they separate themselves from the principle, they separate themselves from the light, and from life. They think that the principle is good in theory but not in practice. They hold that in practice it is good keep the principle frozen until the end of days, the messianic days. They profess the principle externally with their lips; they even understand that until the principle prevails in the world, darkness will not cease to exist. But at the same time they do the opposite. They listen to erroneous teachers and deceptive leaders, who teach them the principle of Separation: racial, national, religious, class, color, sexual, factional, and party separation. So the darkness in the world increases. Great men of all generations have stumbled because of it: prophets, philosophers, scientists, sages, religious and political leaders, etc., as one of the great prophets of all generations said: “For my people have committed two evils: they have forsaken me, the fountain of living waters, and hewed out cisterns for themselves, broken cisterns that can hold no water” (Jer. 2:13).

When we understand all this, we see no other way before us except that which has been shown to us by the human luminaries of every generation: Repentance (teshuvah), the return to the fountain of living waters, to the source of truth – to the first principle. All opposing principles are nothing but “broken cisterns that can hold no water.” The opposite principles, with all their beauty and glitter, are of no use. They are drugs of intoxication and slumber. Redemption and salvation with not come from them.

The Jewish-Arab problem is nothing but an instance of the general framework. For every honest man and advocate of truth, there is no other way but to return to the first principle – with all its inherent difficulty. For just as it is difficult for one who smokes and drinks to refrain from smoking and drinking, so too, it is difficult for people who have been raised from their youth on the principle of Separation to return to the sacred principle of Unity. It is easy to profess externally the principle of fraternity and equality as long as it is in the abstract. But it is difficult when it appears concretely in relation to fundamental facts in the form of man whose name is Mustafa or Ahmad, who demands equal rights with Yair or Yizhar, and when you have the power to thwart his demand and to deny his right. But it is in the overcoming of the difficulty that man, the people, and the generation are tested. On this overcoming depends redemption.

Thank you, Jerry, for bringing to my knowledge such an interesting and morally superior person as Rabi Benjamin ! The principle of "love and equality!", if observed by all, would bring about real change in the world. Sometimes the "love" element tends to be forgotten by some, namely by marxists, such as myself who normally only stress the "equality" element...

THANK YOU for posting this! Please continue to gift us with such writings. It does good to read this and learn about people brave enough to come to moral conclusions in questions that so many avoid today.