Subscribers: Please check out my blog here because this post will be virtually incomprehensible if you can’t see the maps.

I criticized the NY Times for changing an article in response to misinformation given then by the rightwing pro-Israel media watchdog group CAMERA. Here’s what I said;

After CAMERA weighed in, this was the version that was on the [NY Times] web[site]

Israel opened an industrial zone in the East Jerusalem neighborhood of Atarot, which had been Jewish before 1948, shortly after recapturing it along with the rest of the West Bank from Jordan in the 1967 war.

All the above is correct. But I went on to say that the Jewish settlement of Atarot was not even in the expanded municipal boundaries. I said that on the basis of this map from the Civil Administration, provided me by Dror Etkes. 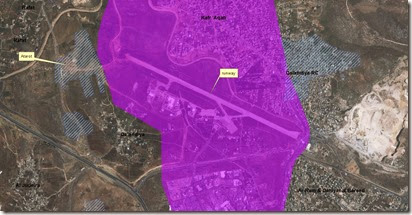 The purple is the area bounded by the city line. Since the blue and white area on the upper left was Jewish land prior to 1948, and that area was tagged in the map “Atarot,” Dror and I assumed that this was the spot of the settlement of Atarot. It may actually been its lands. But it appears that the actual settlement was slightly south, or  south east of the present-day air-strip (considerably expanded in 1972 from the British air strip built on lands obtained from Atarot.)

This was pointed out to me by  Professor Brendan McKay – the well-known Australian debunker of the Bible Codes hoax (among other things).  He was kind enough to send me a British map from 1944. 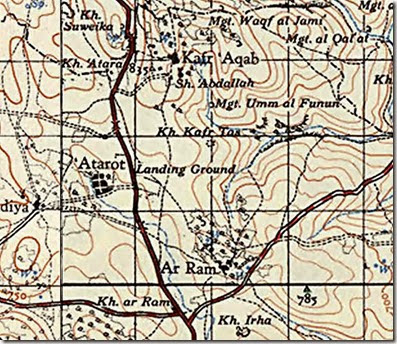 and a modern map: 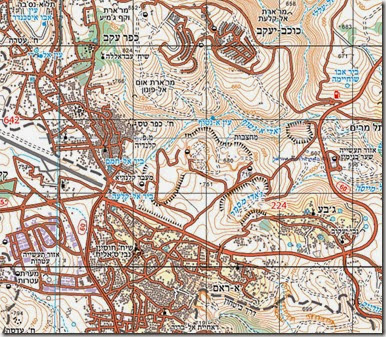 and to write, “on this evidence the buildings of Atarot were at the place which has the elevation mark “757” just below the centre of the runway in the modern map.”

This is somewhat confirmed by the following passage from Meron Benveniste that Etkes sent me: “See the runway that appears in all the maps -- slightly to its south east, you will find the settlement [of Atarot]. Part of it was destroyed by the British in order to build the airstrip, and part was destroy in 1948 after its evacuation.”

Still, prima facie we have a case of dueling maps: the British map of 1944 and the Civil Administration map provided to Etkes. The area tagged Atarot in that map may have been a mistake, or a partial reference to Atarot’s lands  there.

To conclude: so far the evidence appears to be in favor of Atarot being south east of the center of the modern runway and not to its west. (Remember the modern runway is not identical with the British airstrip.)

I would like to thank Brendan McKay and Dror Etkes for spending their time on this. Etkes actually drove to Atarot today to check out the terrain but couldn’t find anything.

For the moment, I’ll go with the British map. But as I said, this really had nothing to do with the errors made by the New York Times, prompted by CAMERA.