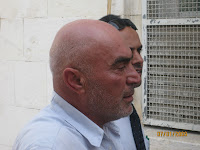 About a hundred activists gathered today behind the Jerusalem District Court for Ezra Nawi's sentencing. Although one of the activists was detained (without any good reason), the event went off peacefully. The sentencing was postponed until October, and there is hope that the sentence will be a light one.

Ezra is the spiritual father of the activist movement in the South Hebron Hills, where Palestinians are constantly under attack by Jewish settlers. For videos of these attacks, and of the activists in Israeli groups like Ta'ayush that support the Palestinian farmers, read Joseph Dana's Ibn Ezra blog here and Jesse Hochheiser's Across the Borderline blog here 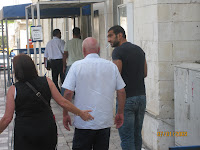 I caught up with Jesse and Joseph today outside the District Court. Joseph told me that the particularly violent against Ta'ayush in Safa was worse than reported; that activists were allegedly beaten by Border Police in Border Police vehicles while handcuffed. It is virtually impossible to film these incidents.

Ezra has been the subject of a film called Citizen Ezra, and his court costs require support. You may find out about it here 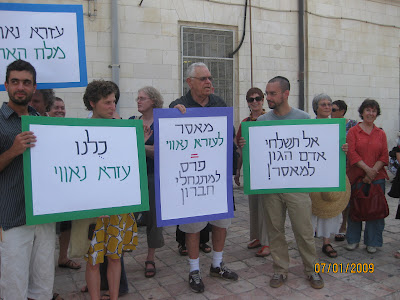