How the IDF Plays the Mainstream Media and the Rightwing Blogosphere 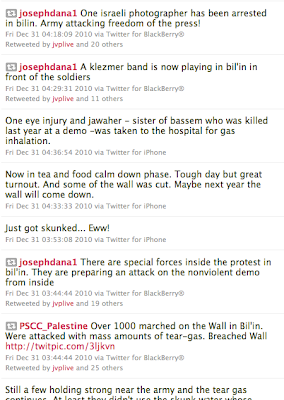 Update: This just in – A JVP tweet from the Bil'in Protest establishes that before 2:36:54 pm Israel time, Jawahir Abu Rahmeh was taken by ambulance to the hospital. The tweet is as follows:

One eye injury and jawaher - sister of bassem who was killed last year at a demo -was taken to the hospital for gas inhalation.

Remember Jawahir Abu Rahmeh, who was killed three days ago by the inhalation of tear gas at the Bil'in demonstration? According to the IDF, as being reported in the Israeli media, she may not have been at the demonstration, and she may not died of tear gas. It may have all been a hoax.

Did Palestinians lie about death of Jawaher Abu-Rahma? Two days after reports that an anti-fence protestor died after inhaling tear gas fired by IDF troops, the army says medical information handed over to Israel raises fundamental question marks about the story.

According to IDF officials, Abu-Rahma may have not even participated in the protest in question

Instead, the IDF "raises question," "points out 'contradictions' in the medical data" suggests that there is on evidence that she was there, claims to have gone over (tens of thousands?) of photographs of demonstrations and not being able to find her.

According to the medical report, there was no clear cause of death, the burial was undertaken via an accelerated procedure, and no post-mortem was performed.

The information also reveals that Abu-Rahma was administered an unusual quantity of drugs, used to offer treatment against poisoning, drug overdose, or leukemia. Moreover, her family's report that she was "hurt by Israeli gas" was not corroborated by any other source.

Since the medical report has not been published, I don't know whether it actually said, "there was no clear cause of death." But it did report – and why shouldn't it – the claims of the family. And why would there be any reason to doubt them? As for no post-mortem and accelerated burial procedure – what religious Jew is unfamiliar with that. What cause was there for a post-mortem examination? As for the drug claim – that is not worth responding to. Who is making the claim? What is considered an unusual quantity of drugs? Who determines what the drug is for?

Who the hell is behind all this crap? Even an idiot can see that the IDF is using the same "methodology" that Holocaust deniers use to raise questions about the number of Jews killed, or the presence of gas chambers to kill Jews, etc. That methodology is to "raise questions," to "point out contradictions", to suggest that the evidence is not convincing, to insinuate that those who make the claims are not to be trusted.

But wait! The same IDF, which only "raises questions" for the mainstream media, has answers to the rightwing blogosphere. As reported in the Muqata at an "exclusive" briefing for bloggers

IDF: We have reason to believe that the death 2 days ago was because of another reason than what the Palestinians are claiming (tear gas inhalation).

We know this woman visited the same hospital 10 days ago and many other times in the past month. When we looked at the medication she was taking – it was for cancer.

The point is, dear reader, that the IDF is desperately trying to grab the narrative, the same way it tried to do in Gaza – and failed – and with the Mavi Marmara – and failed.

Meanwhile, only Haaretz bothered to get a response from lawyer Michael Sfard:

The lawyer representing the Abu Rahma family completely denied the IDF's claims. Lawyer Michael Sfrad said that Abu Rahma went in for testing a week ago for a routine winter illness.

"According to people I spoke with, [Abu Rahma] was at the demonstration on Friday but not at the forefront of the protesters," he said. "After she was injured by the tear gas, she was taken to the village and then transferred to an ambulance. An operational investigation cannot produce reliable findings; therefore we demand a criminal investigation by the military police."

Let's hope somebody in the IDF is listening to Sfard.

How inspiring the Abu Rahmeh family is! They've shown an honorable commitment to non-violent protest, and their many sacrifices (Jawahir's death being the latest) are a testament to that. Nothing the IDF says or does can erase that fundamental truth.

But at the same time, the state of Israel continues to demonstrate how far (and low) it's willing to go in maintaining the humiliations of the Palestinian people. Not even death is enough to stop the occupation forces' "security concerns."

as pallywood producers love to get shots of those injured at one of these protest/riots...why is there not one of jawahir? your buddy, pollack (who i thought was in prison) says he has shots of her at the protest...let him put them on the web.

and please explain how she and only she, was overcome by the tear gas

btw, can you point to any other cases of death from tear gas...when the person exposed is in an open area?

the case does not pass the smell test.

What a great level of disrespect for the tradition of accompanying the dead, a tradition that Judaism, among many other cultures, holds dear. Jews call the tradition Levayah, and it's been elevated to the level of Mitzvah to accompany the dead.

Rabbi Deborah Gordon notes that "when a levayah, A FUNERAL PROCESSION, comes near you, it is Jewish custom to stop and turn and walk in the direction of the funeral procession for a few steps. It is a MITZVAH to ACCOMPANY THE DEAD to their burial place, as it is to bury them; mitzvah not just in the commonly-used sense of “good deed,” but what the word really means: commandment, religious obligation.

Would Bacci40 call the funeral procession that accompanied Yitzak Rabin to his burial place "a parading around of the dead"?

That doesn't even go into the issues related to Tzelem Elohim and how that relates to a post-mortem. Maybe he's already forgotten about the Israeli Soccer player the late Avi Cohen, who made known his desire to donate his organs following his death, but had that decision overruled by rabbis who pressured his family to not donate his organs to those in need. If the belief that the body cannot be desecrated even for the altruistic purpose of organ donation, then wouldn't that be doubly true for post-mortems?

Doesn't make any sense, unless, of course, Bacci40 rejects the entire premises of Lavayeh/funeral accompaniment as well as the very idea of Tzelem Elohim. Which he's perfectly and absolutely free to do, but he should be honest about it.

When the David Project attacked the Roxbury Mosque, it used exactly the same technique of raising questions and then prepping various Islamophobic bloggers to provide the answers.