Saying Goodbye to the Wall – in Bil’in

American Jewish visitors to Israel have made a tradition of saying goodbye to the Western Wall. The custom was mocked by Meir Kahane, who was annoyed that so many Jews would willingly leave the Land of Israel for somewhere else. Zealots like him have been the exception rather than the rule in Jewish history. We have testimony of voluntary exodus from Biblical Times (2 ½ of the 12 tribes ended up on the other side of the Jordan; most of the Babylonian exiles did not come back) through the second Temple period, when most Jews lived outside of the Land of Israel, and even in the Middle Ages, when many pilgrims to the Land of Israel came, took in the sights, and left. Maimonides wrote in his code of Jewish law that it is better to live in the Land of Israel among idolaters than outside of it. He wrote those words after he had left the Land of Israel and had taken up residence in Fustat, Egypt.

Monday night I return to the US to teach the spring semester, so I said goodbye to the Wall. No, not the Kotel/Western Wall, I mean the Separation Barrier that Israel has built in order to separate Palestinian villages from their lands, so that Jewish settlements can expand, or in order to uproot Palestinians. Since the call went out this week for even more Israelis to get to Bil'in, where Jawahir Abu Rahmeh died last week from tear gas inhalation, I decided to make my leave-taking from the Wall there. (I could have walked 10 minutes from my home to the Haas Promenade in E. Talpiyot, from which one sees the Separation Barrier. Actually, there it is a wall, unlike the barrier in Bil'in, which is composed of two high security fences)

The real reason I went to Bil'in, aside from my natural desire to express solidarity with one of the longest-running protests on the West Bank, was to check out for myself the lay of the land. How was it that somebody like Jawahir Abu Rahmeh, who was not that close to the Security Barrier, but closer to the village – 500 meters -- somebody wrote, could be fatally hurt from CS tear gas?

I went in a bus chartered by the Sheikh Jarrah activists that left from the Liberty Bell Park (how appropriate) for the weekly demo that began at 12:30. On the bus, which was full, the leader asked how many people were going to Bil'in for the first time. Over half of the bus raised its hands. We drove on 443, the road that cuts through Palestinian lands, but on which no Palestinian can effectively drive, despite a High Court decision. After being let off by the side of the road, we walked to Beit Ur, where Arab minibuses picked us up to take us to Bil'in. Unfortunately, there was an IDF roadblock to ensure that no Israelis or internationals reach the demo. So the bus stopped before the roadblock, and we hiked for around 15-20 minutes on rocks of the terraced hills until we met up with the bus beyond the roadblock. 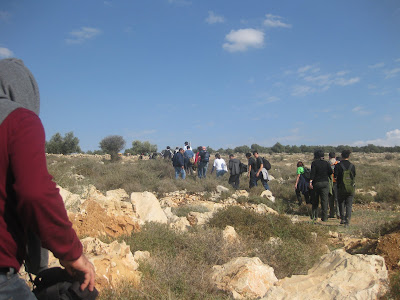 In Bil'in I was shown the fresh grave of Jawahir Abu Rahmeh by activist/blogger Joseph Dana, and then I entered the house of Abdullah Abu Rahmeh, still jailed in Israel despite his having served his year sentence for organizing non-violent demonstrations. Yes, non-violent – he was not charged with violence or inciting to violence; the fact that some people threw rocks was not at all a factor in his arrest and charges. That house serves as the headquarters of the Popular Committee in Bil'in. 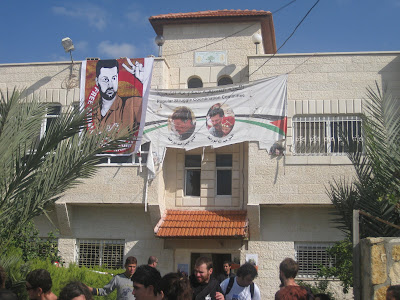 We heard in Hebrew a briefing on the history of the Security Barrier in Bil'in, how it was planned to separate the village from 50% of its agricultural land, how much of that land had been used by settlers for new real estate development, how the High Court had ordered the State to change the route over three years ago, how the Barrier's still had not been changed, how the High Court had not returned land to Bil'in where apartments had already been built, how they would still lose 30% of their land with the new route. We were also told how to react to the weapons used by the army, but, most important, we were told to stay away from the handful of young stone-throwers, and that the action was absolutely intended to be non-violent. (Although we were exhorted not to throw stones or engage in violence, there was no condemnation of the shabab who thrown stones. Indeed, who could condemn the ones I saw at Bil'in? Even if one disagreed with the tactic, it was mostly a symbolic gesture of defiance, and much less lethal than the tear gas fired against the protesters.) The IDF reported, according to Haaretz, two soldiers "slightly injured" by the rock throwers. Perhaps they were suffering from pre-existing conditions.

We then marched in protest through the village and towards the Separation Barrier. At Bil'in, there is a long road leading through agricultural lands to the Security Barrrier. 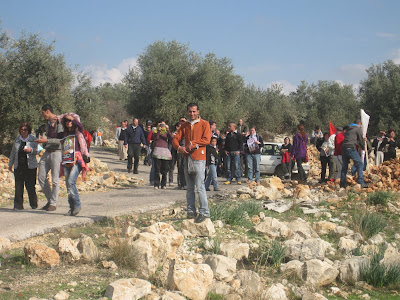 I am not sure, but it seems that the fence was less than a mile from the village. As the hundreds of protesters stretched along this road, the IDF took up positions on the other side of the fence. They then sprayed protesters who got near the fence with chemicals that stink but are not lethal. They stink up one's body and clothes for days and sometimes weeks. I was far away from the machines and the spray, but the wind blew the stench up the hill. 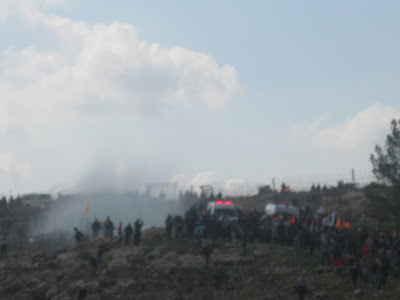 By the way, the spray was there to disperse people and had nothing to do with stone thowers; the stone throwers, I figure, constituted less than a tenth of a per cent of the crowd. Then, the IDF started firing tear gas canisters which, because of the wind, went up to where I was staying so I walked back with others until the effects wore off and then I went back. Those closer were whisked away by Red Crescent ambulances. Some of the time I spent on a little hill watching the action and chatting with Palestinian-American Ahmed Moor, who has been blogging about Palestine for Mondoweiss. At no time was I close enough to the action to be in danger, but, then again, I left the protest at 1:30, when it officially ended (of course, it continued for longer, but the bus was going back to Jerusalem). Things heated up a bit after I left.

Only after I returned did I learn that the IDF had operated much differently last week. They had taken up positions on the road much closer to the village in an attempt to keep demonstrators from getting with hundreds of meters of the Separation Barrier. If that was indeed the case, and the IDF fired huge amounts of canisters, then there would have been a large concentration of CS tear gas close to the village. Somebody could be 500 meters away from the Separation Barrier, where the shabab was trying to tear down parts, and could be choking from the tear gas. Even this week, when the IDF was very sensitive to the interest of the international community, and toned down its reaction, many people were treated for tear gas inhalation. I just shoved a wet rag in my mouth and stayed away.

By the way, there were hundreds of Israelis and internationals, and some of my fellow bloggers from the +972 webzine, including Yossi Gurvitz, Joseph Dana, Noam Sheizaf, and Yuval Ben Ami, were there.

The writer Bernard Avishai was also there – his first time, too. He looked at me after we both had traversed the terrain and said, "These protests aren't for people of our age."

What I would do to see Gary Rosenblatt, Jeffrey Goldberg, Peter Beinhart, Leon Wieseltier, Ron Kampeas, J. J. Goldberg, etc., at such protests against the Separation Barrier within the West Bank! It took me six years of protests, forty three years of occupation, and 30 years after my aliyah to get me to Bil'in. The next generation of Jews won't wait that long

sorry jerry, but you werent just saying goodbye to the wall

if you marched with the above people, you were saying goodbye to israel. they are carrying the flag of the pflp

i suggest you do not return

So what if there were pflp marching...it makes sense that they would march -- there are a Palestinian political party -- just as it made sense that Fatah marched, that Palestinian sympathizers like Hadash marched, that International Solidarity marched, and that over a hundred Israeli activists marched. I didn't see Hamas, but they should have been there, too.

I am deeply offended that you suggest that I do not return to your home....Los Angeles. I actually like Los Angeles, and I hope to return there sometime in the future. In the meantime, stay there; we have enough of your ilk her in my home...Israel.

first off...los angeles isnt my home...it is where i currently reside. but i welcome you to come here and stay.

secondly, i and many i know, although we were against the war in iraq, refused to take part in the majority of protests, as they were organized by answer....we did not wish to be associated with the group.

you, on the other hand, seem to have no problem being associated with those who wish to see the dissolution of the state of israel, and the murder of your people. and thanks for informing me that ism was represented and that you have no problem marching and rioting beside them. you just moved up a notch from enabler to terrorist sympathizer.

oh, and during your stay at u of m, why dont you speak to a prof in chemistry, or someone from the medical school and find out if there is any history of someone dying from exposure to tear gas, in an open area, and between 100 to 500 meters away from where the gas is being disseminated.